Dysport is an excellent treatment for smoothing frown lines between your brows and reducing wrinkles in your forehead and around the eyes (crow’s feet). Dysport is administered so as to not alter your natural expression and features. The Dysport procedure takes just a few minutes and typically lasts 3-4 months.

Despite immense popularity in the U.S. and Europe, proven safety, and high degree of efficacy, there are still many misconceptions about Dysport. This section answers a number of frequently asked questions about the procedure. However, if you are interested in Dysport, we encourage you to have a complimentary consultation with one of our highly-trained clinicians. During that time, they can answer any other questions you may have as well as perform an individual evaluation to see if Dysport is right for you.

Dysport (medically known as abobotulinum toxin type A) is a natural, purified protein used to treat overactive muscles. Dysport has been used to treat muscle disorders in the United Kingdom since 1990.

Dysport is FDA-approved for the treatment of wrinkles.

How are Botox and Dysport similar and different?

Absolutely, as long as you receive true Dysport (made by Ipsen Group, distributed in the U.S. by Medicis Inc) and have it administered by a well-trained clinician. In fact, because Dysport is such a safe, quick (the procedure usually takes only 10-15 minutes), easy, effective, and relatively affordable treatment, it is now easily the most popular medical cosmetic procedure in the country.

Although Dysport is a new treatment in the U.S., given its success in Europe over the last 20 years, it will likely be as popular as Botox within a short period of time.

How does Dysport work to soften frown lines and improve wrinkles?

Dysport treats overactive muscles by blocking the signals that tell those muscles to contract. This can be done partially or totally, depending on the desired effect. The effects of Dysport are temporary and typically last between 3-4 months.

Are there any side effects?

Typically not, though the most common side effect is minor bruising in the treated area. For a full list of potential side effects, you should have a consultation and review an informed consent form.

Yes, Dysport is a highly effective treatment to smooth wrinkles.

I don’t want to look “frozen.” Will I still be able to make expressions?

If your Dysport treatment is administered properly by a highly-trained clinician, you will still be able to make expressions. Depending on the area treated, it may be appropriate to only weaken the muscle movement. You can discuss this with your clinician prior to treatment.

The vast majority of clients are extremely happy with the results of a Dysport treatment. The most common comment made by friends and family of clients after receiving Dysport is that they appear to be more “rested.”

How is Dysport administered? How much Dysport will I need?

Dysport is injected with a small needle in tiny amounts to specific areas. Dysport is usually sold to clients by the unit.

It is important to note that Botox and Dysport are measured differently (much like feet vs. meters). This difference is accounted for in the pricing. 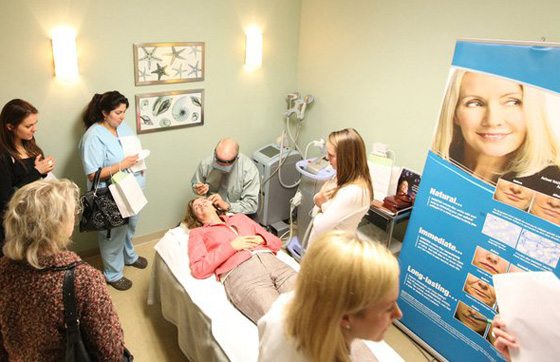 How long do the effects of Dysport last?

What is the difference between Dysport and dermal fillers (such as Restylane®, Juvederm®, and Radiesse®)?

How important is the skill level of the clinician in receiving an effective Dysport treatment?

The skill level of the administering clinician is very important. There is an artistic element involved with Dysport injections in order to ensure that the client achieves effective wrinkle reduction while still maintaining a natural look. Also, if a clinician is not highly-trained, they may need to inject more Dysport to get the same effect. Thus, sometimes an attractive per unit price may end up costing you more money.

Why is Evolutions Medical Spa the premier location in Santa Barbara to receive Dysport treatments?

Evolutions’ owner and medical director, Dr. Terry Perkins, is one of the country’s foremost experts on Botox®. He was selected to be one of only 16 physicians in the United States to evaluate Botox® in the FDA study that led to its approval for cosmetic uses. Dr. Perkins has performed thousands of Botox® injections and has pioneered the threading technique for maximum effectiveness. Furthermore, all of the injecting clinicians at Evolutions have been personally and extensively trained by Dr. Perkins on facial anatomy, Botox® theory, optimal injection locations/techniques, and practical application.