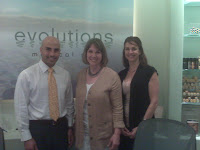 Yesterday Evolutions Medical Spa in Santa Barbara held an exciting educational event introducing Dysport – the first real alternative to Botox. On hand was the Dysport representative (left in the picture) who held an informative presentation and question and answer period followed by a live demonstration by Dr. Terry Perkins of a patient receiving Dysport. In addition, attendees who purchased a Dysport treatment at the event received a special discount and one lucky raffle winner won a free treatment!

Key points that we learned about Dysport: 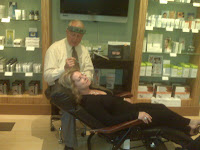 What people are saying on

A very luxurious spa! Very relaxing, and I love the fluffy robes. They were wonderful and really worked the tension out of my neck without being too rough. I loved it!
Anna H.
Lindon, UT