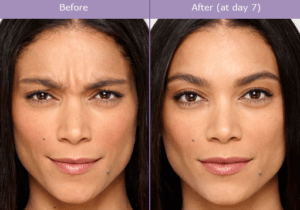 Santa Barbara cosmetic surgeon, Dr. Terry Perkins, and founder of Evolutions Medical & Day Spa, has been an advocate of the use of Botox before many of us even knew about it. In fact, Dr. Perkins was one of 16 doctors selected by the FDA to conduct a study in 1999 of Botox which led to FDA approval of Botox for cosmetic use. Since then Botox has become a very popular treatment for those who want to “erase” their frown and wrinkle lines from their foreheads. However, the latest exciting news is that Botox may also be beneficial in keeping wrinkles at bay. Repeated weakening of the muscles over time can help prevent the wrinkle(s) from forming or from becoming too deep.

To further support this, a study was done on identical twin sisters to evaluate the long term effects of Botox use. One twin received Botox approximately two to three times per year in the forehead and glabellar region (frown lines between the eyebrows) for 13 years. The other twin received Botox only twice over the 13 year study (at years 3 and 7). The results showed that imprinted forehead and glabellar lines were not evident in the twin that was regularly treated with Botox but were evident in the twin that was only treated twice. It was also noted that untreated facial areas (the nasolabial folds – the line that forms from the nose to the corner of the mouth) showed comparable aging in both twins.

Recently an article that was published on “Today Health” cited the twin’s study and also referred to an article by JAMA Dermatology which stated that it is “rarely too early” to start the “conservative and thoughtful use of neuromodulators [i.e., Botox], fillers and noninvasive energy-based treatments.” The article goes on to say that it is not endorsing the use of Botox in children or teens, nor are we, and even the 20s may be too early as well. Signs of aging varies by individual and often will depend on many factors, including a person’s skin type, their genes, and any environmental damage (sun and UV exposure), but normally begins in the 30s for most people.

The best time to start Botox as a preventative treatment to help inhibit the progression of deeper wrinkles would be at the onset of wrinkles (even if they are very mild). At Evolutions Medical & Day Spa, we always offer a complimentary consultation to help our clients individually decide what may be best for them.

Many of our clients feel very fortunate that Botox and Dysport treatments became available to help transform their “look”, literally turning their frown upside down. The next generation of Botox users are even luckier to have the option to prevent wrinkles before they start!

What people are saying on

A very luxurious spa! Very relaxing, and I love the fluffy robes. They were wonderful and really worked the tension out of my neck without being too rough. I loved it!
Anna H.
Lindon, UT